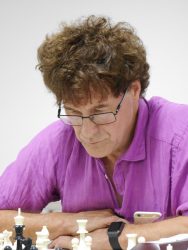 Alan Goldsmith has been a leading player and chess teacher in South Australia for many years. He has won the State Championship four times (in 1982, 1987, 1989 and 2016), as well as placing equal 4th in the 1990 Australian Championship. Alan loves playing attacking chess and this has led to many of his games being published in books and magazines. He has been writing the Sunday Mail chess column for over 30 years and is President of the SA Junior Chess League, an office he has served for more than a decade.

Alan is the current President of the SA Junior Chess League. He has been organising and running the League since the early 2000s after the retirement of Mrs Evelyn Koshnitsky BEM, AM, and has been supervising the regular Inter-school Secondary Competitions on a Friday night for many years. He has also conducted all the State Junior Championships for the past 15-20 years, as well as running many other junior events. Alan was also President of the SA Chess Association for over 10 years in the 1980s-90s and during that time was on the Organising Committee for many big International chess events in Adelaide such as the fabulous 1988 World Junior Chess Championships and the Adsteam-Lidums Tournaments.

To quote highly-respected British author Gary Lane, writing about one of Alan’s wins:


“(Alan Goldsmith) is an Australian who specializes in odd openings and delights in playing them. Of course, moving the knight twice should be frowned upon, but Black is doing something rare in this era of professional chess – he is playing for fun. “
Knights & Bytes
Mob: 0401 672 481
Email: alang@knightsandbytes.com.au